Dubai: It was a bit of a “bargain” time in Dubai’s super-luxury property space, with 2020’s costliest deal coming in at Dh75 million for a home in Dubai Hills. In fact, the top 10 deals last year were bunched tightly between that Dh75 million sale and a Dh48 million one, which was the value for a home in Marsa Al Arab in Umm Suqeim.

Compare this with the Dh120 million sale in Dubai Hills in 2019, which was priciest deal on a residential property in Dubai during that year. In second and third places were Dh98 million price tags, according to listings from Luxhabitat Sotheby’s International Realty. At Dh79 million, even the 10th place came in higher than the top deal in 2020.

So, are wealthy investors turning cautious when it came to picking up property assets in Dubai? That’s not how Alex Stern, Senior Consultant at Luxhabitat Sotheby's International Realty, sees 2020 trends.

“Deals are being closed within the 5-10 per cent margin of the asking price - which has always been the case,” he said. “The ultra-luxury sector has historically been the most stable, even when all the other categories have seen corrections.

“High net-worth Western investors are being encouraged to come to the UAE due to the global economic uncertainty and pandemic fluctuations. At the moment, the majority of ultra-luxury buyers are from outside of the UAE.”

Others in the local property market echo these sentiments, saying that demand for luxury homes in Dubai is “running at steady”.

“Maybe the deals are taking longer to complete, that’s probably the only change that the COVID-19 situation has created,” said an estate agent. “Because plot sales at locations such as Dubai Hills and MBR (Mohammed Bin Rashid) City are still in demand, and these will eventually turn into super-premium mansions.” 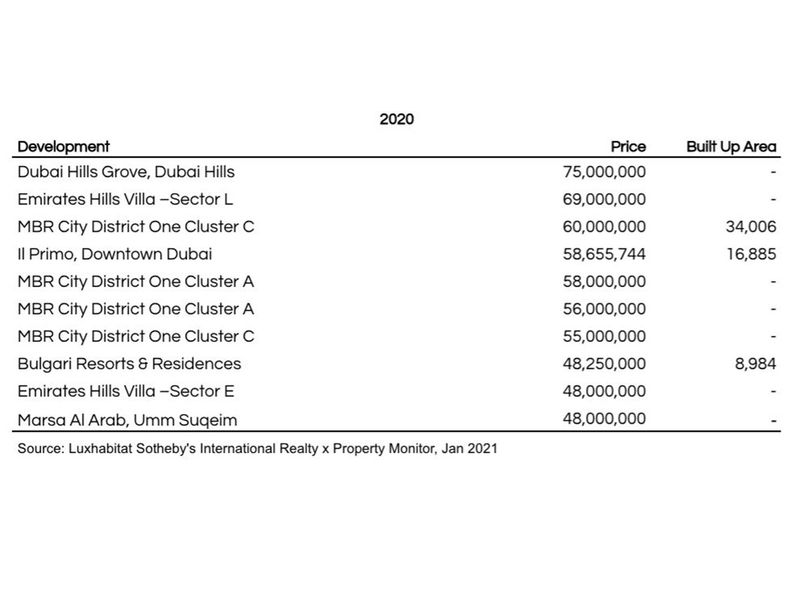 In fact, MBR City had four listings in the 2020 Top 10, while Emirates Hills came up with two. There was a Bvlgari branded residence that went for Dh48.25 million placed eighth in the rankings.

As for Dubai Hills, this is the second straight year that the location has retained its title as the destination where the mega-deals take place.

According to Niraj Masand, Director at Artha Realty, developers are throwing in quite a few incentives even at the top end of the market.

“For instance, there are Dh16 million-plus homes being sold by a branded developer,” he said. “While the developer hasn’t brought down the asking price, there are waivers offered on service charges that would save the buyer about Dh1 million over a five-year period.

“So, instead of upfront discounts, luxury developers are throwing in quite a few incentives. There are quite a few buyers who would be interested with these, even if they happen to be looking at Dh15 million or Dh20 million plus properties.”

Market sources reckon 2021 will likely be another quiet year for offplan launches, even in the premium end of the residential market. “There’s still lots of luxury homes getting built – any further supply will only harm current valuations,” said a developer. “Demand is there for luxury homes in Dubai… but it will need careful managing. New offplan launches are not the answer just now.”

or send us a message